In collaboration with scientists from the Vrije Universiteit Amsterdam, Ivan Henriques developed a prototype for an autonomous photosynthetic bio-machine which harvests energy from photosynthetic organisms, applying this energy to movement to be able to collect photosynthetic organisms again. This bio-solar machine will create a symbiotic system with the environment where it is located, which detects, collects, carries and processes these organisms autonomously, amplifying the energy obtained from them using a floating mobile robotic structure. These micro organisms can be found in ponds, canals, rivers and the sea, which are a potential source to feed the Symbiotic Machine. The environment where it is located can be cleaned as in the case when harmful algae blooms. During two months the Symbiotic Machine lives in an aquarium in the Glass House, where it feeds itself algae. In the back space research materials, objects, texts and drawings will be shown while hands on workshops for adults and kids will also be offered there. Symbiotic Machine is developed in collaboration with Raoul Frese and Vincent Friebe, scientists of VU Amsterdam Laser Lab, physicist Michiel van Overbeek and engineer Leydervan Xavier from Cefet/RJ (Technological School from Rio de Janeiro, Brazil) and invited by Zone2Source. 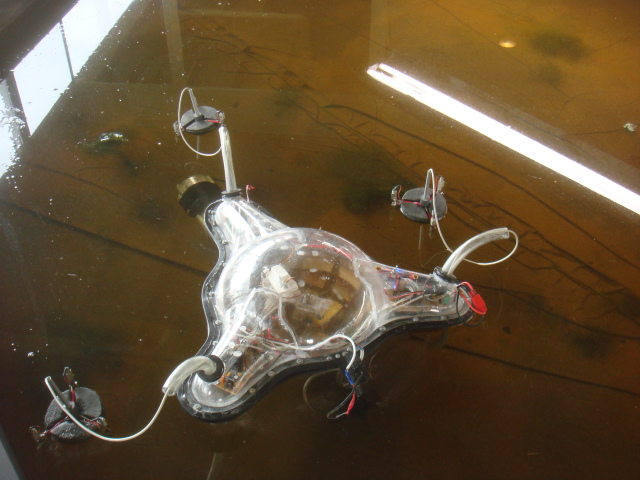 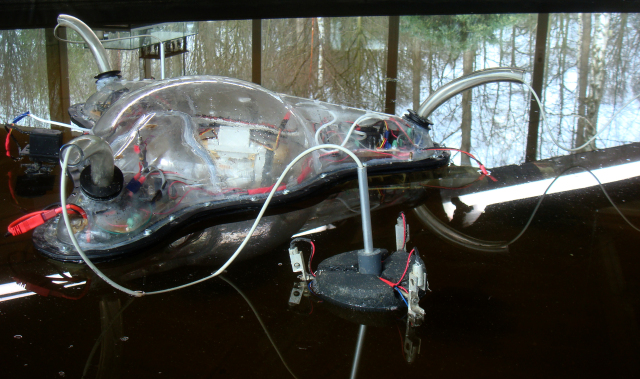 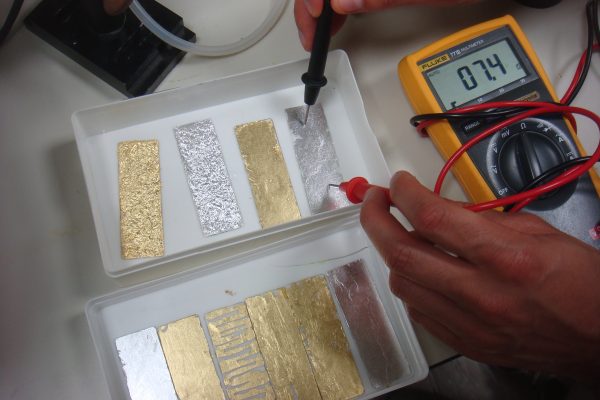 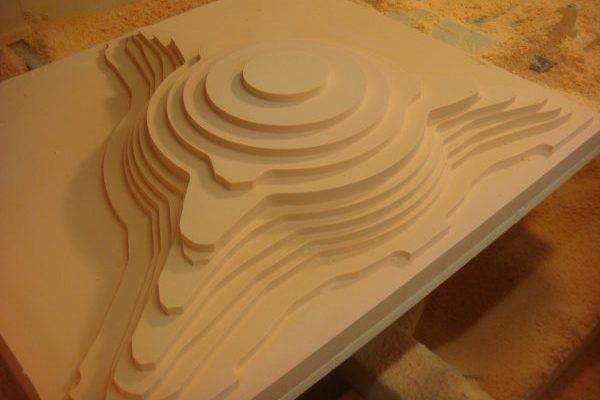 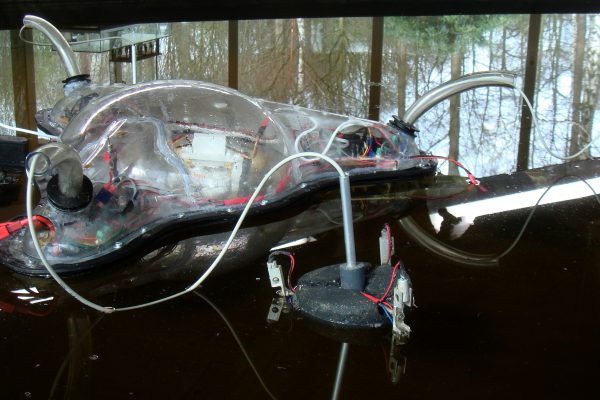 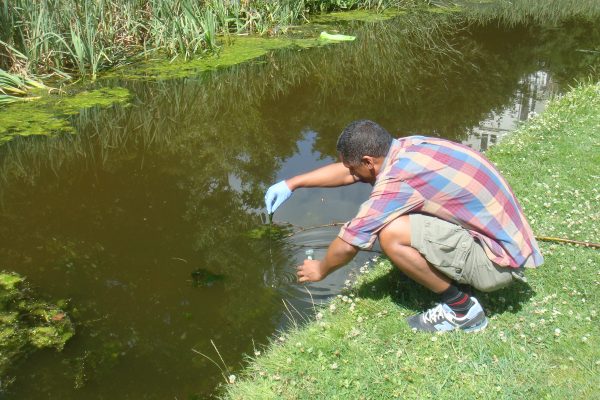 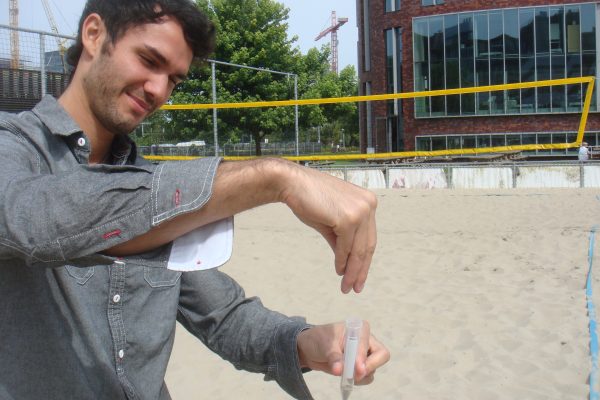 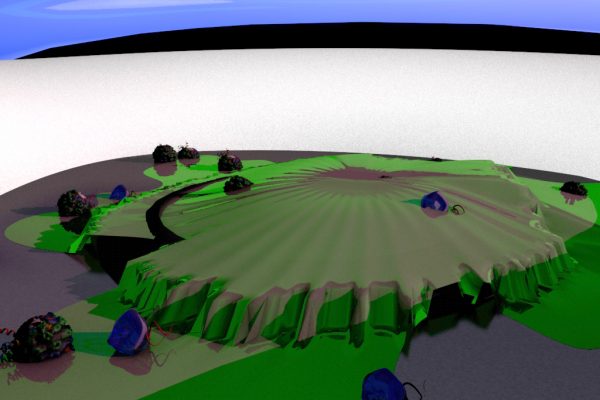 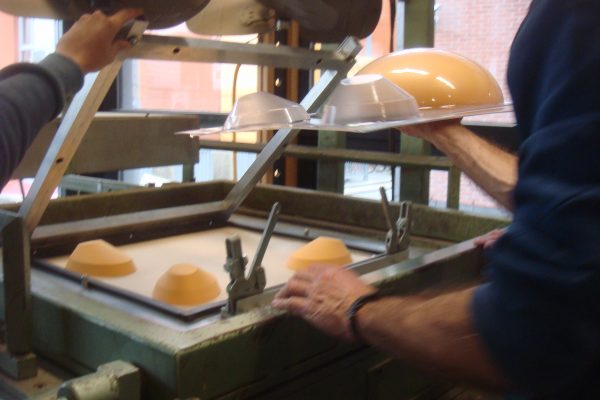 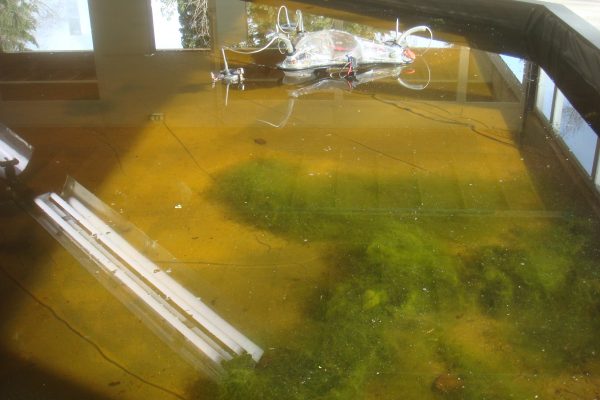 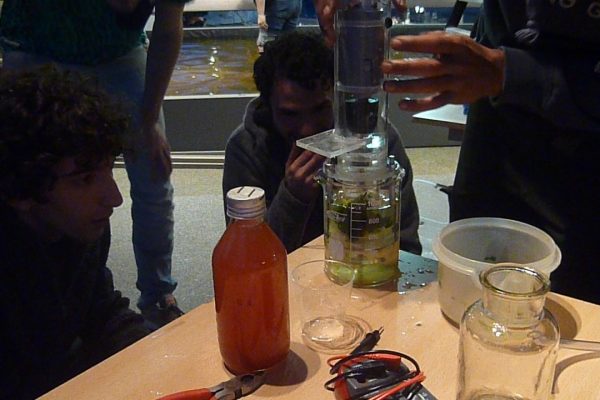 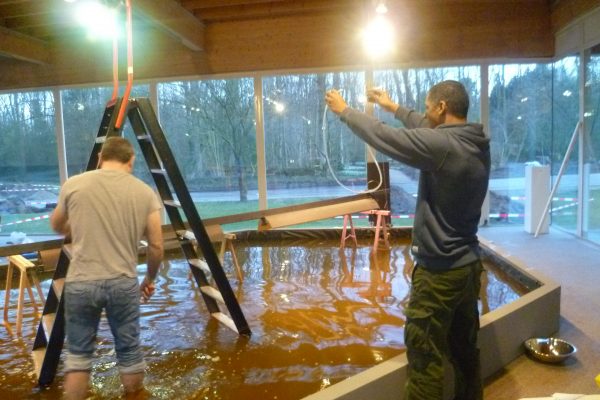 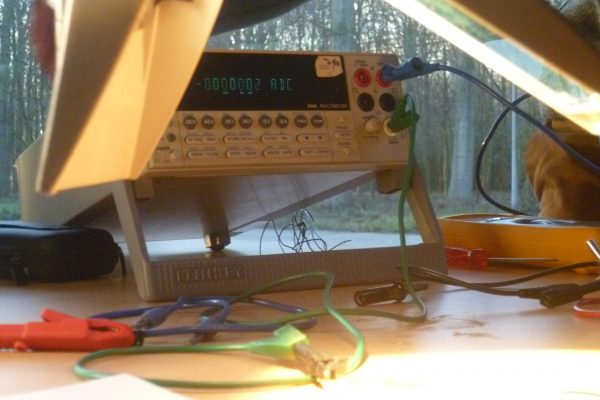 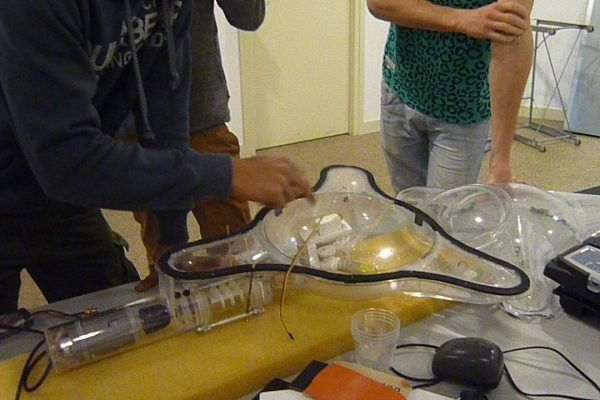 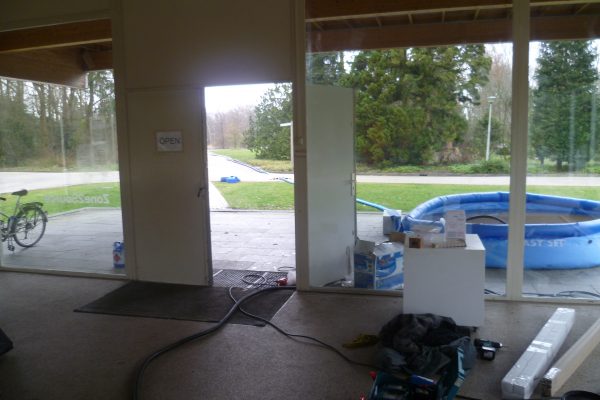 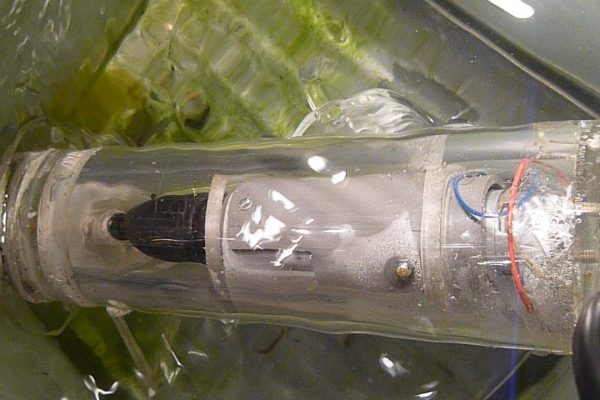 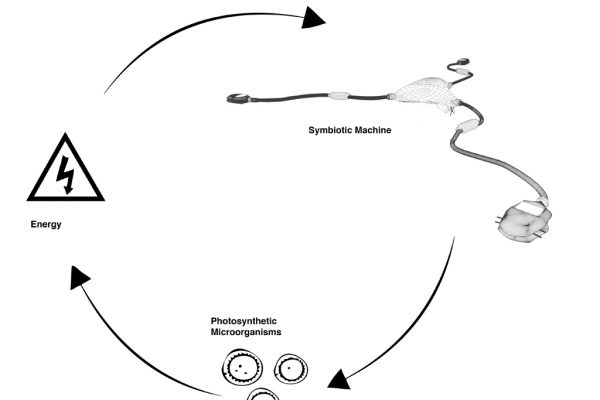 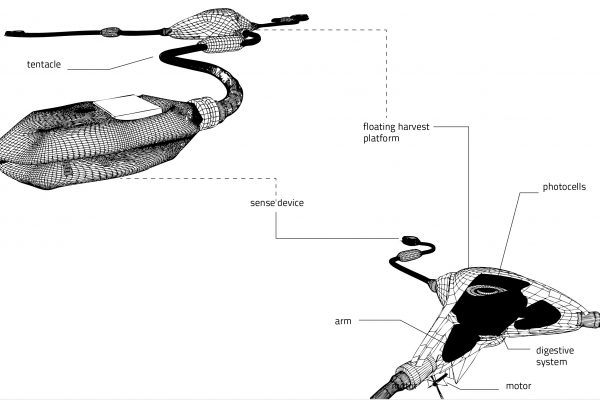 Sealed with a transparent cylinder a motor, an endless worm and a pepper grinder aligned and connected by one single axis compose the mouth/anus, like a jellyfish. This cylinder has a liquid inlet/outlet (for water and algae spirogyra) placed at the end part of the endless worm. The endless worm has an important function to pump liquid in and out and to give small propulsion for the machine. Once the motor is activated the endless worm can turn to the right or to the left. If it turns to the right it sucks liquid in. If it turns to the left it pushes liquid out. The machine is programmed to pump algae and water in and out by the information transmitted by the sensors.

In order to “hack” the algae spirogyra photosynthesis’ and apply it as an energy source, the algae cell’s membrane has to be broken. The pepper grinder that is connected at the end of the endless worm can grind the algae breaking the membrane cell, releasing micro particles. These micro particles in naked eyes looks like a “green juice” which is flushed inside the machine: the stomach.

A tube that comes from the end of the mouth with ground algae goes though the stomach inside the ellipsoid of revolution. This tube is fastened on a 2-way valve placed in the center of the spherical shape.

Inside the ellipsoid of revolution there is another bowl, just one centimeter smaller aligned in the center. Placing this bowl inside, it creates two chambers: 1] the space between the outer skin and the bowl and 2] inside the smaller bowl. In chamber 1 the photocells are placed in parallel and in series. The photocell is composed by a plate covered with gold, a spacer in the middle covered with a copper mesh. This set up allows the “green juice” rest between the gold and copper.

After the light is shed on the electrons of the ground algae they flow to one of these metals, as a lemon battery. As all the photocells are connected, with the help from the electronic chip LTC 3108 Energy Harvester is possible to store these milivoltages in two AA rechargeable batteries.

(A life cycle with functions was idealized in order to program the machine and activate independent mechanical parts of the stomach: it has to eat, move, sunbath, rest, search for food, wash itself, in loop)

The 2-way valve mentioned above is connected as: valve 1 hooked up with chamber 1 and valve 2 with chamber 2. When the stomach works is sent information to the machine that the valve 1 has to be opened. The algae flow to this chamber and the machine uses a light sensor to go towards where there is more luminescence to make photosynthesis. It rests for ten minutes. After the 10 min sunbath the machine has to clean its stomach – and the photocells – to be able to eat again. Water is sucked in again with the mouth, and via the same valve from the algae, it pumps more water inside chamber 1 in order to have an overflow of this liquid in chamber 2. The liquid, which is now in chamber 2 is flushed out by the motor turning the endless worm and having the valve 2 opened.

Fixed on the edge of the structure opposite the mouth, an underwater pump connected by a vertical axis with a servo powers the movement of the structure giving possibilities to steer 0; 45 and minus 45 degrees. 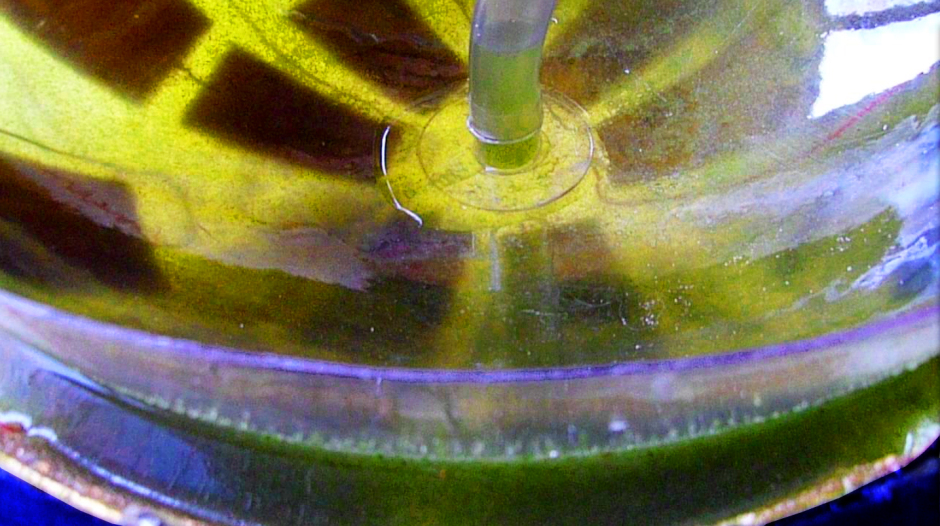 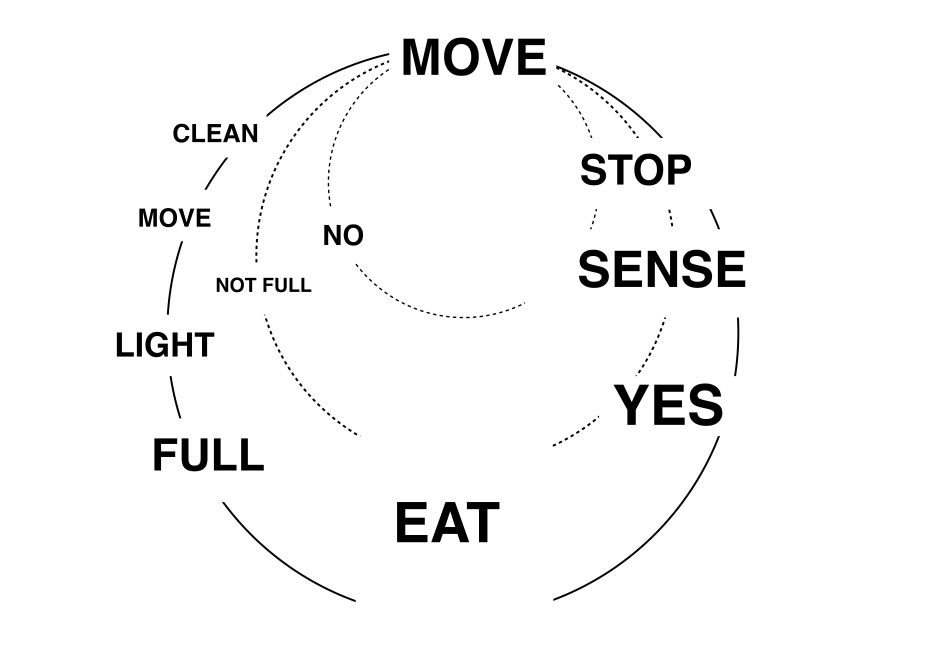